The Spirit of Anatomy: Discovering the Whole Self

Lately I’ve taken an interest in the various ways of defining and healing the human, and how I can put them together with Western anatomy to help people become whole and vibrant.

The daily observation of people is “normal” in a way that “objective” scientific investigation isn’t. In fact, it’s unclear that objectivity exists; it turns out that E.coli in a beaker behave differently when observed. But science is a religion in our culture, meaning that we believe its abstractions, and the information they generate, to be the ultimate truth.  We know the limitations of science, such as its inability to explain the spirit – what it is that gives our bodily machines life. We ignore those limitations when we assume that the results of scientific investigation are all there is to us. And scientists, by and large, ignore the energy field that every-body is when providing people information on the self and its health.

I teach science. I use it every day in my work and teaching. But I don’t believe it is the only way to describe reality. Left as the only way of knowing, it would be a meager and mostly inappropriate preparation for body-based healing work. The problem is that ways of knowing that are not scientific have been pushed to the wayside because science is considered “real” while other ways of knowing, ways that rely more explicitly on intuition, are not.

I call science a religion because it has come to be considered equivalent to reality, and that equivalence has led to practices and thoughts that often supersede common sense and ignore or displace phenomena that are obvious but which can’t be explained within its paradigm. Many scientists are striving to embrace and construct explanations for spiritual and energetic phenomena – but a lot of scientific “findings” and ways of knowing are taken as absolute, stable truths even by esteemed, dedicated, and open-minded scientists, and certainly by lay people. 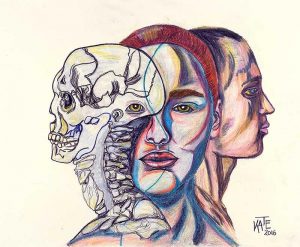 The minute a person starts thinking of “objective” science – or anything else – as equal to reality, they have to start hiding, ignoring, or setting aside information that doesn’t fit its model. The animating principle that separates a dead body from an animal, for an example, can be observed and described scientifically, but the nature of the animating principle is not examined by scientists. Even Descartes, the “father” of modern science, had a place for the soul in his model, but it was later put aside (perhaps when scientists failed to measure or identify it per se.) A remarkable set of scientists are digging into ‘the mystery of life’, but so far, it hasn’t been traced to its smallest individual datapoints and reconstructed in a synthetic process of individual studies, so it can’t be understood in scientific terms for now. For many people (even scientists!) the logical conclusion is that, despite evidence to the contrary, it doesn’t exist. Still, anybody knows the difference between a dead body and a person, and we know that something evanesces at death – even if one’s way of describing what evanesces happens in languages other than scientific.